Almost two months ago the Dutch government decided on the 'intelligent lockdown' to deal with the corona virus. Despite this, the housing market figures for the first quarter of 2020 still show increases in both rentals and purchase prices. However, the number of purchase transactions fell. In March, in particular, there were significantly fewer transactions. In all probability, this decrease is a consequence of the uncertainties associated with the corona crisis. For more on this and other topics see the FRIS Quarterly Update 2020 Q1. Now online, the Update can be downloaded from our website. This edition of the Quarterly Update compares first quarter 2020 figures with those of the first quarter 2019. And in this article, we zoom in on the third month of the 2020 first quarter; the month in which the 'intelligent lockdown' - and the uncertainty in the market - started.

Rentals and purchase prices up despite corona crisis

Despite the corona crisis, the figures for the first quarter of 2020 continue to follow the long-term trend of rising rentals and purchase prices. Compared to the first quarter of 2019, the first three months of 2020 show a nationwide increase of prices per m² of 7,9% in the owner-occupied sector and 6.7% in the rental sector. March continued the upward trend of January and February. Purchase prices rose slightly in all the cities surveyed. Only Leiden and Lelystad experienced a slight drop in prices. However, the number of transactions in both cities was very low - in Leiden only 8 transactions and in Lelystad 32 - which can magnify price differences. These were also partly due to larger average floor areas, which in turn translate into lower prices per square metre. All in all, we can therefore conclude that the corona crisis, as at March, has not yet impacted purchase prices. Rentals show a more mixed picture. In the Zaanstreek and Lelystad, rentals fell. However, given the low number of rental transactions in these municipalities, no conclusions can (yet) be drawn from this shift. 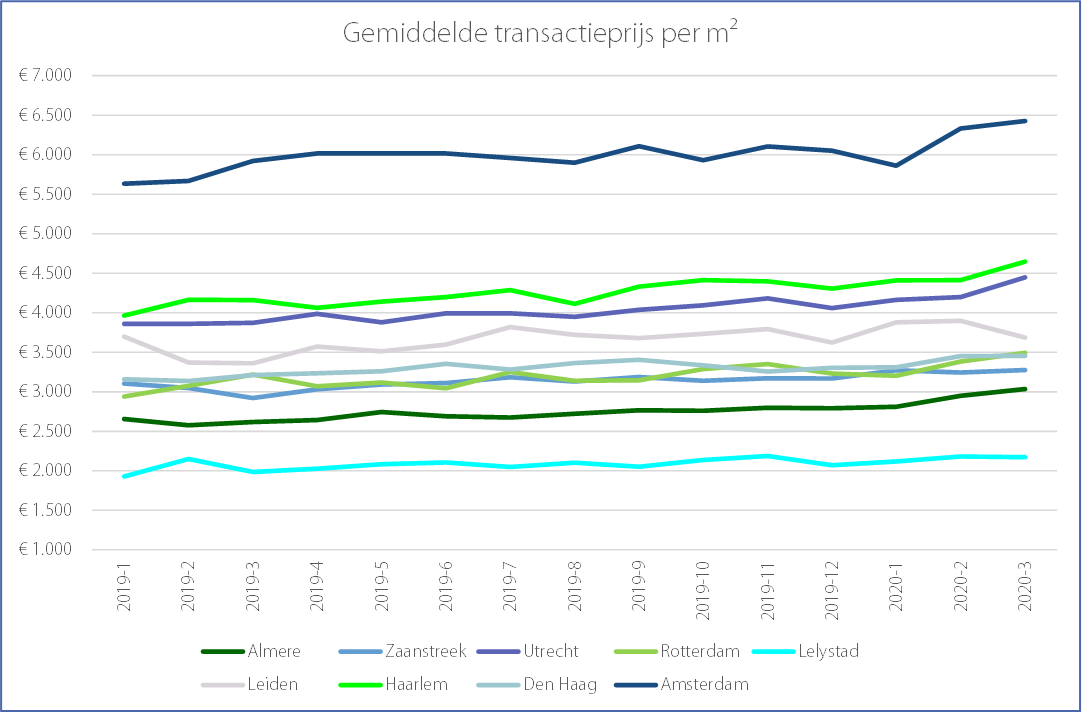 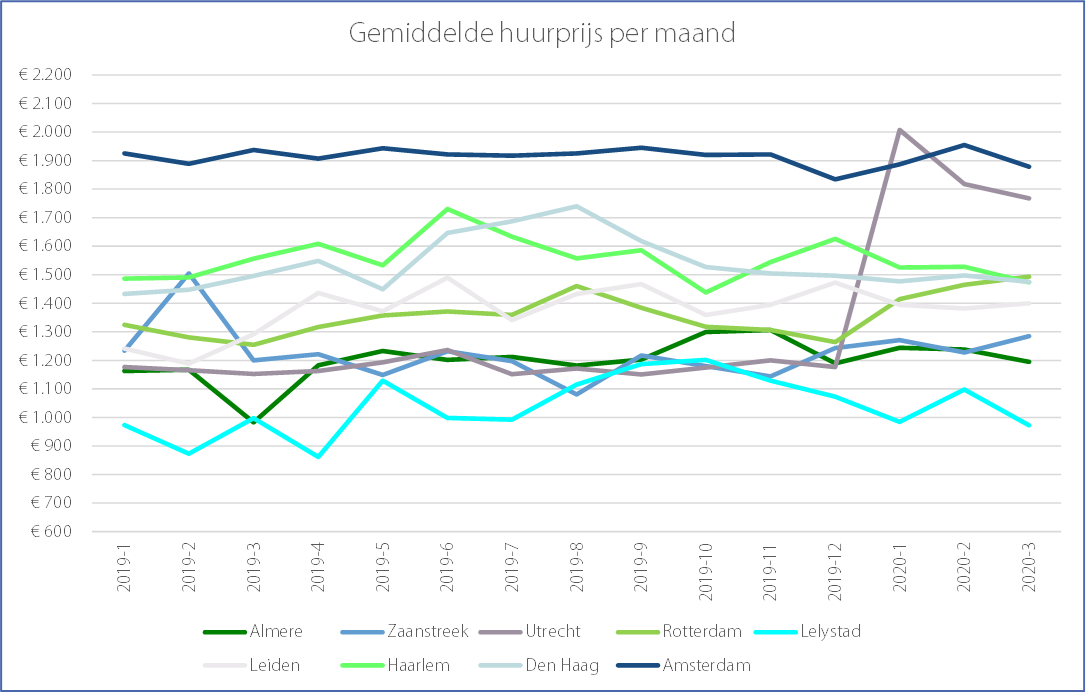 Number of purchase transactions significantly down 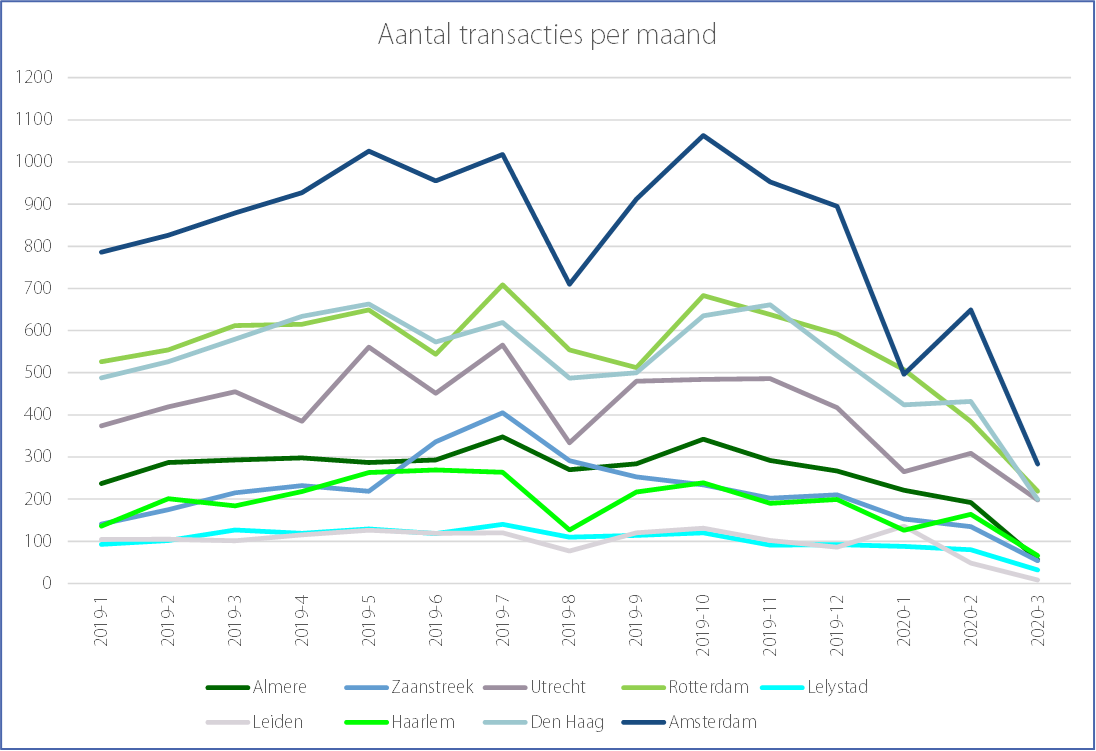 In recent quarters the housing market has been dominated by overbidding. In the financial crisis years, bids above the asking price occurred, but on a limited scale. Since the economic recovery in 2013, however, the number of overbids has increased radically. From around 2017 payments were more often above than below the asking price.  And in the first quarter of 2020, three quarters of Amsterdam and Zaanstreek home sales were overbid. In all other cities surveyed, about three quarters of the homes sold in the first quarter of 2020 were sold above asking price, with an absolute peak in Lelystad, where 83% of homes were overbid. In March, the number of overbids increased further. This was true in almost all cities. Leiden was the only exception.

The first quarter of 2020 was unusual. Scarcity still clearly characterises the housing market. The number of transactions has fallen further. While prices and overbids have risen further, to record highs. It is still too early to see the impact of corona measures on the figures. Though we do see far fewer transactions in March. This is probably largely due to a lack of clarity about what was and was not permitted after the introduction of the corona measures. For example, whether sale properties could be visited for viewing. Funda recorded a 'break' of about two weeks in March, after which the number of registrations of houses increased.

Our database is updated on the date of signature of the deed of sale. This date is on average one to two weeks after the verbal agreement. This means that only sales up to and including 24 March are included in the March figures. The 'intelligent lockdown' started on 12 March. The period 12 to 24 March is so short that the enormous decrease in transactions cannot be fully attributed to that period (nor, therefore to the corona measures). A possible additional explanation for the large decrease in the number of transactions lies in the fact that between accepting the bid and signing the deed of sale, the buyer may cancel the purchase. Although we cannot see this in the figures, we think it plausible that multiple bids made at the beginning of March, which had not yet been recorded in writing, were cancelled due to the corona measures.

As a result of the corona crisis we will now analyse housing market data on a monthly rather than quarterly basis. We therefore expect to publish an update on the April figures within two weeks. We foresee a difference between the effect of the corona measures themselves and the economic effect as a result of those measures. This will be thoroughly analysed in our upcoming articles. Keep an eye on our website and social media for these updates.

Interested in our data? We have a unique housing construction data set which we use to provide well-founded market analyses and incisive advice to private, public and corporate clients in the real estate market. More Information? Contact us at +31 (0)20-3017740 or advies@fris.nl. 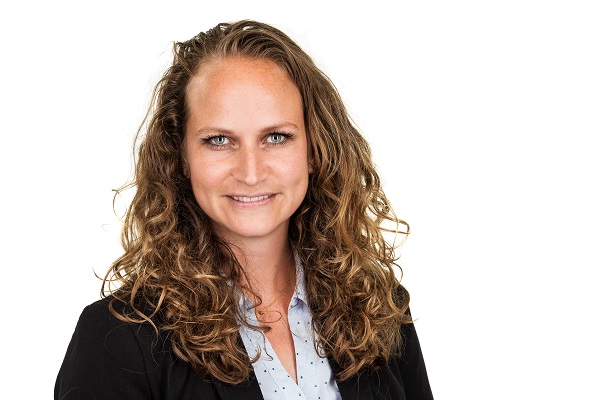